Dog Tail Down Or Up And Stiff? Dog Tail Meaning Explained!

A very common misconception about a dog’s body language is that a tail-wagging dog equals a happy dog. Just because a dog’s tail is wagging doesn’t necessarily mean that he is happy, it can mean quite the contrary.

Whether you’re a fellow dog owner and wonder about your own dog’s tail wagging and what it means in relation to his body language or if your neighbor has a dog and you wonder why this dog barks at you while wagging with his tail, you’ll find the answer below.

How do you read dog tails correctly?

The following signals will help you interpret your dog’s tail:

Make sure to check out my article on dog breeds born without tails. After all, these dogs have to communicate too, just in different ways.

But how exactly do you spot the difference when it comes to tail wagging interpretations and how can you catch all the slight nuances that make up a dog’s communication methods? Let’s find out.

Why Does a Dog Wag His Tail?

First and foremost, dogs wag with their tails to convey information which can include: Mood, hierarchy, mating signals, defense mechanisms, signs of peace, etc.

The first thing to note when you want to evaluate a dog’s tail and body language is that every dog has a different tail (think of the curly tail some breeds have).

The Rottweiler (like my girl) has a curly tail which is raised quite often, in these cases the tip of the tale is a good indicator of your dog’s mood.

A pointing tip of the tail means threatening or potentially aggressive behavior – I have never seen my Rottie raising her tail like that although I have seen it in various other breeds including the Akita and Basenji.

Your dog’s tail meaning is determined by the following factors: Tail position, range of motion, speed.

Following this rule, you can generally divide the tail positions into high, medium, and low while you can divide the range of motion into two categories (short or broad) and speed also in two (slow and fast).

Ever seen a dog with the tail down acting nervous?

A dog that waggles his tail in a low position in short bursts (short meaning a very limited range of motion in this case) and very quickly is generally in some kind of emotional distress at that moment which means he’s feeling anxious and/or insecure.

Situations in which a dog displays a slightly slower but also short wag could also mean he’s uncomfortable to some extent.

This insecurity can occur when your dog meets other new dogs or people and isn’t particularly sure about them, for example.

That doesn’t have to be a statement about the other dog at all, it can vanish quite quickly when you leave that situation or your dog confirmed that his fellow canine wants to do no harm.

However, a lot of dogs also utilize low tail-wagging when they greet other dogs or people. It’s a sign that your dog is peaceful and relaxed, although not too aroused or excited. The same applies to broader strokes, although this is a more relaxed wag most of the time.

Dog Tail Between Legs and Shaking

A tail that is tucked between a dog’s legs accompanied by his whole body shaking nearly always means that the dog is very fearful and should be removed from the situation he’s in.

Owners who see their dog with the tail tucked between his legs may feel that the dog acts weird, even though there’s nothing to be afraid of.

Always evaluate if something might have happened that could cause serious bad associations for your dog (especially with rescues) without you noticing right away.

Instead of shaking, a dog with the tail between his legs can also just freeze.

While dogs generally utilize fight or flight (like we humans do to some extent) there is always a time where dogs try to collect more information about the situation and that’s when the freeze can occur. This freezing is often learned behavior but can be worked on with proper training.

In rare instances, a tucked tail can also mean that a dog experiences an intimate moment with a person that’s very dear to him.

Why? Dogs always convey information with their scent and in moments where they just don’t want to share, they block their tail from spreading the scent throughout the room. This way, other dogs don’t feel invited in the first place.

However, if your dog has his tail between his legs and is whimpering or panting, then that tail waggle could mean your dog is in pain.

If your dog’s tail is down and you think he might be sick, you should always consult a vet. Body language and tail positions can help a lot with determining a dog’s health & mood as our canine companions can’t talk.

Dog Tail Up And Stiff – Dominance?

A dog with a raised tail is generally not met warmly by other dogs as this could be a sign for trouble, especially if this particular dog encounters another dog that won’t back down.

If the tail wagging occurs in short bursts paired with a high tail, that generally means that the dog is insecure but trying to assert dominance. Often, these dogs feel they have to overtake the leadership role not because they’re best suited for it but because nobody else assumes it.

Insecure dogs might feel comfortable when others assume the role of a leader because this provides them with certainty and safety, especially within their own family. Beware of experimenting with different training methods as every dog is different and you always have to look at the bigger picture.

If you encounter a dog that makes slow, broad strokes, this is generally a sign of a dog that is very sure of himself and not necessarily ready to back down. You shouldn’t approach this dog if you’re not familiar with him.

This tail waggle can often look like a waving flag and might also be a sign of dominance. When threatened, this can be a warning signal or (depending on his general body language) the prelude to an attack.

Dog Barks But Wags With Tail

To us humans, these two emotions seem conflicting when in fact (like mentioned above) they are perfectly within the spectrum of a dog’s communication repertoire.

A quick, broad tail waggle can mean high arousal, often paired with barking when strangers approach the property. This is the classic “The dog’s barking but wagging his tail at the same time”.

Extreme arousal can quickly go beyond reasonable excitement and people or other dogs can end up being hurt. Owners who try to regulate dogs physically in this phase often end up with the backfire of their own dog’s attack.

Make sure you know about other signs too, although certain signs like growling can be misinterpreted too. Check out the linked article for more on that.

Beware of dogs that assume these positions and do not try any alpha games or anything like that as it is often suggested by alpha training enthusiasts. It’s important to handle these types of dogs on a case-by-case basis and to determine why they’re wearing their tail high in any particular moment.

Why Does My Dog’s Tail Wag in Circles?

This is the type of tail wag most people refer to when they think of a positive one.

The happy wag consists of broad strokes that occur in a medium-raised position and can be quick or slow as well as circling but always with a relaxed body posture.

Labs are pretty known for wagging like this without any particular reason. They display the helicopter tail wag when they’re having a fun time playing or when their guardian enters the house. This can go as far as a heavy tail wag every time they anticipate walks or food or if they are just comfortable in general.

If the tail wag drifts into a very quick one, it can signal that little extra portion of excitement. Of course, over-excitement is almost never desirable (a problem I dealt a lot with during my Rottie’s puppy phase) but this is where the whole body language comes into play. You have to determine various other factors to really say if a dog is over-excited or just very happy.

Dog Holding Tail to One Side

A lot of resources cite various research studies in which dogs who wag their tails to the right seem to be more likely to react friendly in comparison to those who wag on the left.

However, if you’ve observed a female in heat holding the tail to one side (without wagging) then that may very well be a female in search of the perfect mate. You will probably find a jumpy and aroused male nearby.

A little trick to see if your female dog will make herself available to other males is to just gently rub the root of her tail. If the tail goes to the side, she’s probably ready and you will want to be careful about letting her off-leash.

If you’d like to know more about the anatomy of a dog’s tail, I’d be more than happy to help you out by letting the experts shower you with information. Check out this illustrated dog anatomy atlas.

The graphics are easy to understand, visually appealing, and a fun, interactive way to learn more about our beloved canine companions. 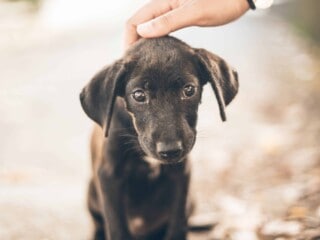 9 Reasons Why Your Dog Growls When Petted
← Read Last Post 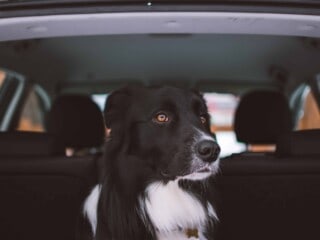 Great article... I enjoyed it & learned a great deal. Thank you!!

Thanks, I'm glad you enjoyed it, Tony!