10 Cute Dog Breeds that Are Born Without a Tail

We all know dogs with floppy ears and beautiful tails similar to the appearance of a wolf. But over the many years of domestication, certain dog breeds are born without a tail.

What may look weird to some people is actually very cute and wanted by others. Dogs that are born without tails or with small ones fall under the category of bobtailed breeds.

Responsible for the most known bobtail breeds is an ancestral T-box gene mutation (C189G).

Dogs with a bobtail are naturally born with this trait and should not be confused with docking.

Modern tail docking is done for aesthetic reasons and often practiced without anesthesia which makes it extremely painful for the dog.

Docking and cropping are banned in many countries like Germany, Australia, Italy, Norway, and the list on and on. You can find the complete list on Wikipedia.

Dogs with short tails ≠ Dogs with no tails

There’s a difference between a tailless dog and one that has been equipped by nature with a little stub, even though many people assume that some breeds are cropped or just don’t have one.

Dogs with short tails are being achieved through selective breeding and are natural. Below you will find a list of 10 dog breeds that are naturally born without a tail.

You may also find bobtailed dogs within normally tailed breeds.

Due to breeding, there are actually over 170 breeds among which dogs with short tails (bobtails) can occur.

The mutated gene is a dominant gene so we may see more dogs without tails in the future.

A little side note: Three of the breeds mentioned here are actually among the 10 Favorite Breeds in the US too.

So what are the breeds born with a short tail or no tail at all?

There are actually five breeds often mentioned as having no tail, when in fact they do have short tails (called a nub or stumpy tail):

Whereas some are born with short stumpy tails, these are the only breeds that can be born without tail:

Do French Bulldogs Have Tails?

The French Bulldog is born with a very short and stumpy tail that covers the anus (according to UK breed standard).

French Bulldogs were originally used for ratting and selective breeding gave them this short and cute tail.

The French Bulldog is probably the first breed that came to your mind when thinking about dogs without or with short tails.

Brittany Spaniels were historically bred as gun dogs and are still being used for various sports.

While most dogs in this breed have short tails, some are actually born tailless.

It is not known whether the short tails occur through natural mutation or breeding with other Spaniels.

Are Boston Terriers born with tails? Yes, they are and the little tail on a Boston Terrier is called a “nub” and is mentioned as a standard characteristic.

A long or docked tail disqualifies a Boston Terrier from registration which makes it hard for long-tailed dogs to be recognized as purebred.

Do Bulldogs have tails? Yes, Bulldogs are naturally born with a short straight or screwed tail while the straight one is more desirable according to the breed standard.

Just like with any other breed, there are abnormalities and bulldogs can be born with a long tail. But they are just as great as companions.

Opposite to the Australian Cattle Dog, this breed is naturally born with a stumpy tail (as the name suggests) that is no longer than 4 inches (10 cm for our metric friends).

The Australian Stumpy Tail Cattle Dog was specifically bred to withstand the harsh environment of the Australian outback while herding livestock.

This rare breed is only being officially bred in Australia and Canada.

The mutation of the Braque du Bourbonnais’s tail has been discovered as being identical to the Brittany Spaniel.

This breed was also called “short-tail pointer” and originated in France although it’s mostly being bred in the USA today.

Are Corgis born without tails? A short or missing tail is a very desirable trait in the Pembroke Welsh Corgi and really distinguishes it from the longtailed Cardigan Welsh Corgi.

Corgis were being docked for a long time until it became illegal in many countries and breeders had selectively bred for this trait.

The tiny tail on the Corgi is d by a recessive mutation in the T-gene.

The tail length of the Brazilian Terrier can vary from long to completely missing but the docked tail is seen as the breed standard.

The origin of this small tri-colored dog is not completely discovered and different theories mention the Jack Russel Terrier and Fox Terrier as ancestors.

The Croatian Sheepdog used to be naturally born with a long and curly tail which was usually being docked.

After docking became illegal in Croatia, selective breeding was the only way to keep passing on this trait.

Today, most dogs are born with a very small or no tail at all.

Just like the Croatian Sheepdog, Schnauzers are naturally born with a long tail. The natural mutation of the T-gene allows breeders to keep the desirable bobtail.

Traditionally, Schnauzers were always docked like many other small farm dogs as a part of the AKC terrier group.

Docking is a very old practice to remove parts of or the whole tail of a dog. Like I said, naturally occurring bobtail breeds should not be confused with docked breeds.

Looking back into history, tail docking had the purpose of adjusting the agility and health of dogs so they could perform baiting, fighting, and ratting.

Today, tails are docked for purposes to alter the appearance of the dog. Over the past 20-40 years, many countries completely banned docking and cropping.

A lot of criticism was directed at the AKC for promoting tail docking as some of their breed standards, making it impossible to register an undocked dog.

Organizations like the American Veterinary Medical Association are fighting for the removal of these unnatural breed standards.

Are Rottweilers Born without Tails?

Yes, Rottweilers are naturally born with a long curled tail. It is extremely rare that you will encounter a Rottweiler that has been born with a bobtail, it will most likely be docked.

I own a Rottweiler myself and love her long tail swinging around.

You will see a docked Rottweiler in the USA more often than a German Rottweiler because docking and cropping have been banned here.

A docked tail also not aligns with the (original German) breed standard and is totally unnecessary.

So no, you will not find a Rottweiler without tail.

Next time somebody asks you “Are Rottweilers born with tails?” please shout YES.

It saddens me how many people think it’s natural for a Rottie to be tailless due to the docking practices.

Are Boxers Born with Short Tails?

Boxers are not being born with short tails, and certainly not without tails either. They are traditionally docked at a young age to meet the AKC breed standards.

An undocked Boxer is even being penalized for not having a short tail. This docking is purely for appearance and serves no other purpose.

Some bobtail boxers were being bred over time and exported to other countries but they are extremely rare.

You will find them most often in countries like Australia where breeding clubs demand them to be bred this way.

The regular Boxer should have a long tail.

Are All Dogs Born with Tails?

Although most dogs are being born with long or small tails, some breeds may come into this world completely tailless like the Brittany Spaniel.

In the beginning, all of the old and original dog breeds had tails but selective breeding and gene mutation altered this appearance.

Share your thoughts on tail docking with me in the comments and let me know if you have encountered any of those bobtail breeds.

Check these out if you’re interested in similar topics

Other interesting questions that might be of interest to you: 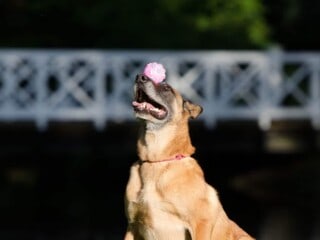 Everything You Need to Know About Dog Jowls
Read Next Post →

You did not mention the Schipperke. They are almost always born with just a nub, and it is so cute when they try to wiggle it.

My friend is helping us find a puppy and she found one born November 16 female chihuahua; I really wanted to know if she will have any problems or concerns I should be aware of? I had to put a puppy down because he had a genetic disorder that didn’t allow him to feel ability to urinate and he didn’t make it; he died at 10 months old! Thanks so much

Hey, it's really sad when puppies this young don't make it, especially if it's due to a preventable genetic disorder. If you're buying from a breeder, read my article on breeder questions which should be a good start for you. There's more to picking the best puppy for you than health (although the most important aspect).

General genetic disorders can be avoided with the right health tests as well as making sure that the reputable breeder has x-rays of the parents' hips/elbows, heart and eye tests and breed-specific issues - the Chihuahua club as well as other veterinary sites/foundations should have resources on that. Great breeders are quite rare but will do anything and everything to ensure they're breeding healthy puppies.

My Jess just had a litter of 10 now and one pup was born with no tail, not even a stub.

What type of dog is Jess?

Hey Herman, it can occasionally happen that dogs are born tailless, even though they usually have one. Just depends on the breed and individual puppies. Hope your pups are healthy and well :).

It looks so unnatural for a dog not to have a tail! Its tail expresses so many moods, joy, uncertainty, aggression, misery. How can people take this means of expression away from the animal? It's inhumane!

They truly do express a lot with their tails and I couldn't imagine my Rottie without one. Depending on where you live, it's just common practice but the trend goes more and more towards not cropping/docking :).

We have two rottweilers - one with a tail and the other - Huxley, is a german natural born bobtail.

as mentioned in the article, Rottweilers can definitely be born with a bobtail but it's super rare for German lines. Interesting that you mention he's a German Rottie - no docked tails on any of his ancestors I assume?