Everything You Need to Know About Pink Dog Noses

The black cute nose is a loved canine feature and it’s the most common color you will see.

When running across a puppy or dog that deviates from the norm you ask yourself “why do some dogs have pink noses”?

But just like different coat colors, your dog can have different nasal tones and pigmentation.

There are five main nose variations: liver (pink), dudley, butterfly as well as blue and black.

Genes directly affect the coloring of a dog’s nose but pigment loss can also cause a change in color resulting in the dudley nose.

Injuries can lead to damaged pigment on the nose which could be temporary or permanent.

If you want to learn more about the pink phenomenon then keep on reading. You’ll also get a few tips on how you have to care for your dog’s pink nose.

Why Do Dogs Have Pink Noses?

Dogs come in all shapes, sizes and color variations.

Most of them have been achieved through selective breeding or mutations that have been past on over generations.

Some dogs are born with a black nose and others have matching snouts to their coat colors.

Nose color is generally regulated by the amount and distribution of melanin in a dog and can change with age and breed.

But why do they have pigmented noses? Melanin is used to protect the nose from sunburn and skin cancer and we utilize its pigmentation to determine a dog’s true color.

Puppies may be born with a light or pink nose that darkens as they get older. This change in color could already happen by the age of 8-16 weeks or even one year.

Genetically red or liver dogs are being born with a liver nose that stays pink their whole lives.

If a liver puppy is born with a black nose, it’s a sign that the puppies from this particular bloodlines aren’t truly red and shouldn’t be sold as such.

Even dogs with pink noses can experience a slight color tone change over the years which is also affected by the amount of sun exposure.

The liver gene is recessive, so it must have the genotype bb in order to be superficially present.

On the other hand, a BB or Bb dog (meaning either or both carry the dominant black gene) would have a normal black nose.

For a liver dog, it’s genetically impossible to develop a single black or grey hair. Instead, liver will turn the coat brown, the eyes amber and the nose color will range from brown to pink.

Certain dog breeds like the Irish Setter may resemble a liver dog but are indeed just a recessive red with dark pigmentation.

On the contrary, liver dogs might not even be labeled as such as in the case of the “Chocolate” Lab. The brown nose and yellow eyes are results of the liver gene and therefore they are liver dogs.

Dog breeds that can have liver/pink noses include:

In conclusion, a red, brown or even white-coated dog with amber eyes and a liver or pink nose is carrying this gene.

Sometimes the liver color might not be included in the breed standard so be careful when choosing your dog.

Genetics is a very interesting matter and can be highly interesting for any potential puppy buyer when it comes to temperament and behavior.

The dudley nose is the result of pigmentation loss due to illness or environmental influences which I will be talking more about below.

The usually black nose begins to turn pinkish in the middle, spreading outwards until almost the whole nose is covered.

Compared to the pink of a liver or butterfly nose, this color appears rather dull and always leaves a rest of dark pigmentation around the edges.

Pink noses in Bull Terriers are often referred to as dudley noses although the color mostly emerges from the white coat, not from a loss of pigmentation.

These breeds are prone to developing a dudley nose:

Recommended Reading: Do dogs have lips?

Snow noses, also called “winter nose”, are similar to dudley noses with the big difference that they are not permanent.

During the winter months, the dog’s nose might turn pink and in spring it will switch back to its natural color.

But don’t be fooled by the name winter nose, dogs that don’t live in cold temperatures can also develop this color change.

The cause of the snow nose is unbeknownst but treatment gladly isn’t required as the nasal color change is only a cosmetic issue.

Some suggest that the enzyme Tyrosinase (which is controlling the production of melanin) causes this phenomenon because it’s temperature-sensitive.

What Causes Pink Noses on Dogs?

Dudley noses can develop from a variety of causes. If you suspect that the depigmentation of the nose is linked to an underlying disease, consult your vet immediately. I have listed the most common reasons below:

Recommended Reading: Everything you need to know about dog jowls

A butterfly or parti nose is defined as randomly located patches of unpigmented (pink/liver) and black spots that resemble the wings of a butterfly.

This beautiful and unique looking nose is courtesy of these breeds:

How to Care for a Pink Nose

Applying specialized doggy sunscreen like the Handy Hound SnoutScreen during the summer month will prevent painful sunburns on your dog’s sensitive nose.

Apart from that, pink noses need the same care as darker ones and should be regularly moisturized with Dog Nose Butter to avert and cure chapped and crusty snouts.

Labrador Retrievers can have a pink nose and are oftentimes referred to as “Dudley” Labradors.

Yellow Labs are usually born with pink noses that turn dark when they grow older but Dudley Labs stay that way.

These Yellow Labs are pretty special and only occur out of specific mating combinations. However, in conformation the Labrador would lose some points for his pale nose since it’s not part of the AKC breed standard. 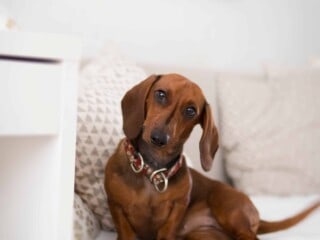 Why Do Dogs Bark at Night?
Read Next Post →

Why did the term “liver” come to be chosen in reference to pink colour of nose. I know it refers to colour name in established color chart BUT why was it called liver and let’s say, not just pink? How much or how little is this term a direct reference to the color of the human liver organ?

what a great question! It is not quite clear where the term "liver" in reference to a color actually came from but it was first recorded in the 17 century. The color liver has little resemblance to the actual pale pink that some dog noses have. For example, the nose of a Chocolate Lab is also referred to as "liver" and couldn't be called pink. While the color liver refers to a dark reddish-brown, the organ is a more deep reddish-brown.

What about Border Collie with Butterfly nose?

Hi my mini dachshund has a pale line right down the middle of her nose, that has always been there. She is Black and Tan. Is this a sign of dapple or chocolate gene? The line is pale grey/liver. Or is this Dudley nose?

Hi Diane, depending on how prominent the color is it could be a dudley nose. It greatly depends on your weather, your dog's age, and parents. However, different colored noses usually don't appear in Dachshunds and it may be something your dog will grow out of.

I have a 6-month-old miniature Australian Labradoodle (see Instagram link, @ihuckleberryme) who has a pink nose. We have always considered it liver-colored, but is he actually a "Dudley"? His pink/liver nose (and other visible facial skin like eyelids and lips) have not changed in the 4 months since he joined our family. It's a very distinctive look that always gets a reaction when people meet him, and I'm wondering if it is likely to change or not. Thanks for your helpful article!

dudley noses are characterized by a pinkish (usually very pale) center with black on the edges. Your sweet boy's nose has a perfect liver color to it that is evenly colored and very common in Labradoodles with similar coats. At six months of age, the nose will most likely stay the same or darken a bit. Some dogs change their liver nose during the winter months to a more pinkish tone which happens due to the lack of sunlight.

Im a breeder with a stunning Blue Merle Aussie Shepherd x Golden Retriever pup of 6 weeks that was born with a black nose that at 4 weeks went bright pink with black surrounds. No inflammation. Dad is Red Merle with pink bits but mostly brown/black. The mum owner says that they used to feed their dogs some 30 or 40 years ago with a minetal supplement that used to darken their noses but can't remember what it is. Any ideas?

Hi, thanks for commenting! First of all 6 weeks is still very young and the nose can completely change until the age of 3 or 4 months. Small pink pigments can even fill out until they are 1 year old. I have heard of one supplement that is made of elderberry and nettle and used to darken up the pigmentation by increasing iodine and iron intake which is lower in older dogs and during the winter months. However, the effect and safety of such supplements aren't proved or tested. There is really nothing wrong with a speckled nose as long as the puppy and both parents are healthy.