Does Genetics Determine My Puppy’s Temperament?

Sure, socialization is key, as is the right mental and physical stimulation.

Still, why are some pups prone to being fearful of noises or suspicious of strangers regardless of you doing your chores as a responsible dog owner?

After deciding on a breed and a reputable breeder, temperament testing is the next step to determine which puppy fits your lifestyle and purpose.

Doing your research about the genetics of dogs and how it affects temperament will make living with your dog a piece of cake.

The genetically defined temperament is often ignored because legend has it that grabbing the first pup that conquers your heart is the way to go.

While this might be an outgoing dog, it might not be the right choice for you because super open dogs tend to be easily excitable with high drive.

Whereas a needy pup can be prone to separation anxiety, one that does not care at all about your presence might be a tad too independent.

That’s why you want to observe the puppies for several hours (it’s best to pay multiple visits) and why it’s essential to find a breeder that decides with you – not for you – which puppy is the best fit for you and vice versa.

There are several things you can do to test a puppy’s temperament but first, let’s dive into the role of genetics.

Fear & Aggression Can Be Genetic

Sadly, there are almost no meaningful (requiring thousands of test subjects) long-term studies that focus on genetics in a way that is crucial for regular owners pertaining to the decision of which pup to bring home.

This study mixed the Newfoundland x Border Collie due to their contrasting characters.

They evaluated the pups based on five criteria: “demand for affection, excitement barking, startle response, sociability and likelihood of staring” and found out that all pups fell somewhere in the middle.

After mating them to each other, the behavior patterns got completely out of hand in the next generation. Suddenly balanced dogs churned out offspring displaying extremes from both, becoming very unpredictable.

What are the problems with this study in regards to what we’re trying to find out?

Another study that bred two friendly dogs to each other and two aggressive/fearful dogs states the following:

“A similar long-term project in the U.S. has resulted in a line of pathologically fearful pointer dogs. (…) The lines of animals breed true, meaning that if a fearful animal is bred to a fearful animal, all of the offspring are fearful without exception, even when raised by a non-fearful non-biological mother.”

The only conclusion one can draw from this is that fearful parents will (almost) certainly have fearful offspring but it doesn’t really clarify if two friendly dogs produce friendly dogs only or what happens with other combinations (more on that below).

Studies related to extremes might not be useful for regular owners because your dog not being aggressive doesn’t mean that he will be easy to manage around people, which is a no-go for therapy dogs, for example.

What would happen if you bred two balanced dogs, would the puppies only exhibit balanced traits?

A question that is rather important to determine is when someone is breeding working dogs with two very lively (tending towards the dominant end oft he spectrum), will they produce similar puppies?

The same applies to a pup used for therapy work with two calmer dogs (but never fearful dogs as this may cause them to bark, be easily startled which means they’d be unsuitable for sudden environment changes).

And that’s exactly how therapy breeding programs select their dogs.

As you can see, there are plenty of possibilities and this area is pretty tricky but you can definitely turn the odds in your favor for your future puppy.

What Does This Mean for Your Puppy’s Temperament?

In reality, most puppies will fall somewhere between their parents.

So if dog A is vivacious and dog B is calm, that doesn’t necessarily mean that all of the offspring will be balanced, nor does it mean they will be like either one of their parents.

Luckily, it certainly doesn’t mean they’re going to be extremes, although the occasional outlier can be observed.

If you’re seeking a suitable family pet (assuming you’ve chosen the right breed for you, are able to provide mental/physical stimulation as well as socialization), you’d be best advised with a puppy from balanced parents or at least one balanced parent.

Although this is uncharted territory in terms of larger scales and conclusions, there are a couple of very interesting articles about genetics.

Check out this article if you want to know more about why your canine might behave the way (s)he does.

If you’re not afraid to dive into some science, the linked research paper behind this The Bark article is great.

The Controversy Around Temperament Testing

Trainers and behaviorists often voice concerns about temperament testing while others practically choose the puppy based solely on that.

Personally, I didn’t feel it was necessary to temperament test my Rottweiler puppy but that’s mainly due to my trust in the breeder.

If you have an experienced breeder that really understands his/her dogs, you might keep testing in your mind but rely on the breeder in the end.

If you’re not willing to consistently train, research and get professional help, certain breeds might not be your best beginner’s choice.

There might even be differences from litter to litter. As we all know, even the puppies from the same litter can turn out differently.

But is 4-6 weeks really a good age to start predicting how the adult dog will be with kids or other dogs?

Ask yourself what career you would’ve been put in when you were five years old. Not so easy anymore, right?

At best, temperament testing provides you with tendencies of how the puppy will turn out but they might as well grow out of it.

An experienced breeder is happy to help if you explain your situation and expectations.

Below is the best Youtube video I could find for this topic. In the end, you can see how he chose his own Cane Corso puppy.

Don’t hesitate to inform your breeder if you’re looking for certain characteristics and tell them what you’re planning to use them for.

Stay Away From Breeders That Don’t Know Their Dogs

Have you stumbled upon a breeder who advertises his puppies as typical, powerful and athletic “working” dogs and if you ask them, they assure you that their dogs are perfect family dogs?

Some backyard breeders try to market their puppies like this while others genuinely think that their dogs are versatile and fit in all environments.

Getting a dog like this for a beginner’s family with kids because he’s a good protector might end up disappointing both sides.

These dogs need an outlet and should only be handled by experienced owners or those willing to put in the work.

So, if your potential puppy has a lot of Schutzhund titles among his ancestors, that’s great to show off but it should be balanced/watered down with a calmer parent if you’re planning to get a dog for the family (which makes the Rottie the perfect choice!). 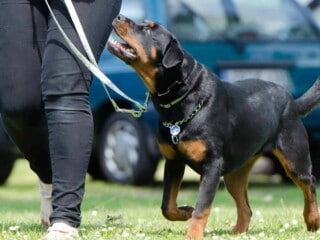 Just signed up to receive your blogs. We are bringing our Rottie puppy Grace home sone. She will be our second Rottie and we are so happy. Looking forward to reading advice for growing puppies. It’s been awhile since we have had a puppy.

I'm happy for you, that puppy time is so exciting and precious! Make sure to enjoy it even though it can be rough in the beginning :).

If you're looking for some advice, I have a blog post about your puppy's first night at home - might help to refresh that puppy knowledge.

Have fun with your Rottie! Danielle