Do Dogs Know Their Name?

Most dog owners love talking to their dogs like they’re also humans, and one of the things we most often say to them is their name.

We call their name to get their attention or when we want them to come to us. We say their name to show our affection or sometimes to express our frustration when they are being a little too naughty.

But do you wonder if your dog understands his name and what you’re saying? For one, does your dog really know his name?

Do dogs recognize their name and associate it with their sense of being?

Since humans have been in a relationship with dogs for a long time now, we might feel that we have already developed this deep, unique understanding between each other.

Dogs and humans have been companions for thousands of years, doing various kinds of activities together. One look at their dogs and the pet owner might instantly know what their pets want out of habit.

We also have moments with our pets where we can swear that they actually did get us, like when we were feeling sad that one time and our pet dog decided to let us cuddle them as if to comfort us.

Or when we scolded them the other day for chewing on the edge of the carpet, and they would suddenly start behaving and showing repentant gestures (misinterpreted as spiteful behavior and guilt) like lowering their ears or looking at us with puppy dog eyes just so we’d stop being angry at them.

So yes, dogs do understand humans in many ways. They understand some of our words, our gestures, and even our emotions, and interpret these depending on the any given situation.

Scientists have observed that dogs can understand our words, and one of the ways they do is by general learning and memory mechanisms. They have called this process “fast mapping”, which is an ability that is common among children who are just learning to speak.

Scientists of a famous 2004 study were able to prove that their subject dog, a Border Collie, was able to learn the names of 200 different items and correctly identify and retrieve them by name four weeks after being initially exposed to them.

A more recent groundbreaking study published in Science showed that dogs are more like us humans: they are smart enough to identify some of the words that we say to them and use the same regions of the brain that we do to process human speech.

By looking at the brain activity of dogs through an fMRI scanner, the scientists of the study found that our furry companions do understand the meaning of our words, especially the ones they hear more often and recognize the intonation we use when talking to them.

They also interpret what we say by identifying the words they hear and the intonation used to express them. So, for example, when they hear the words “good boy”, they will understand it as a reward, especially if it is accompanied by a high-pitched, excited tone.

On the other hand, if you try to trick your dog and act all excited and say, “It’s time for a bath,” it probably won’t work because he already knows what “bath” means and will try to avoid you.

Dogs also understand us through our body language or our gestures that accompany our speech or just our plain gestures.

These gestures may include overt hand movements used to train dogs on certain commands, especially those used to train deaf dogs, as well as subtle cues such as pointing, the direction where our bodies are leaning towards, eye movement, eyebrow motions, and more.

In fact, dogs have an innate ability to understand human signals, as shown by a 2020 study on stray dogs in India on how dogs without any prior training are able to respond to complex gestures.

A whopping 80% of the stray dog subjects, all of which were untrained, successfully followed human pointing gestures to a specific location.

Isn’t it uncanny how our dogs seem to know we want them close when we’re feeling sad?

It has recently been proven that dogs can recognize and understand our emotions, as well as those of other dogs’.

Scientists presented their subject dogs pictures and audio clips of both humans and other dogs displaying happy/playful or angry/aggressive emotional expressions.

The team found that the dogs spent a significantly longer time looking at the images that matched the emotional state of their audio clips, which meant that

“Dogs have the ability to integrate two different sources of sensory information”—auditory and visual—“into a coherent perception of emotion in both humans and dogs.”

This level of understanding of humans by dogs may be due to our longstanding efforts to domesticate them. Dogs may have evolved by necessity to comprehend humans more, as we, in turn, cared more for them since they related with us much better than other animals have.

Do Dogs Recognize Their Name?

Now, the question is, do dogs recognize their name? The functional purpose of your dog’s name is so he knows to come to you when you call him, or he directs his attention to you when you say his name.

Does this mean that he knows his name? Technically, it doesn’t.

As sad as this might sound, your dog doesn’t know that he’s a being whose name is Chopper. But what he does know is the correct response when you say his name.

When you get up in the morning, you can say something like, “Are you hungry, Max?” This would not register in his brain as “There’s my dad asking me – the dog named Max, – if I want some food.”

He would definitely look at you in response with ears perked up, but he would more likely be thinking, “Is he about to give me food? Because that’s what he does every time he gets out of bed. It must be time for breakfast!”

How to Choose a Dog Name?

It might be tempting to name your dog something amusing, like Mr. Poopy McFartface, or Prince Louis Arthur Charles because he’s a prince and he deserves everything.

But as we learned earlier, your dog’s name serves a functional purpose, and for it to work for the both of you, it must be easy for him to remember.

The general rule of thumb: it must be one to two syllables long only.

A name longer than that might not register with him easily. For you as the owner, especially when it comes to teaching your dog to learn commands, saying a long name repeatedly can get a bit annoying.

There are plenty of dog names to choose from:

How Do Dogs Learn Their Name?

Dogs learn their names by operant conditioning or classical conditioning, and both methods should be applied at the same time when training your dog. Both processes happen during recall training, which is the act of teaching your dog to come when called.

The ultimate goal of teaching your dog his name is for your dog to develop a reliable recall, which means he will always respond as intended every time he is called.

This is made possible only by dog owners with an endless amount of patience, positivity, and energy to devote time on training their dog, or by professional dog trainers who can step in and help the dog owner raise a more behaved and responsive pet.

How to Teach a Dog His Name

As I said earlier, teaching a dog his name would require a lot on the part of the dog owner alone. First, set up a daily appointment between you and your dog for when to do the training, so the act becomes intentional for you and not just a time to indulge your dog with treats.

Start teaching him his name as soon as you welcome him into your life.

Use high-value and different dog treats to reward your puppy, so he learns early on that responding to you whenever you call his name is a more rewarding experience that any other distraction he may be faced with.

The first goal is simple: he only needs to look at you when you call his name.

Start with this: use a high-pitched, excited tone of voice to say his name, and as soon as he looks back at you, give him a treat immediately, accompanied by excited praise.

As you continue to consistently and patiently practice with your dog, it won’t take long before he’s ready to proceed with more serious recall training and learn other commands and fun tricks.

Keep in mind that the training process itself will also help strengthen the bond between you and your beloved pet, as it involves spending a lot of time with each other and learning more about your dog’s unique behaviors and preferences.

Don’t forget to keep the training fun and engaging all throughout, so your dog will always have a positive association with this bonding activity that will be the foundation of new commands that you can teach him.

If you’re struggling with choosing your dog’s name or teaching it to him, let me know in the comments. 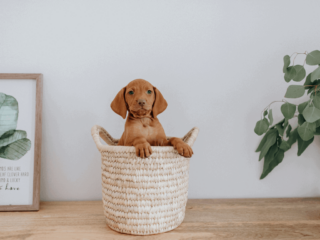 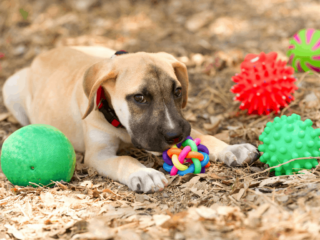 We adopted a female teacup maltese, about three months ago. She is now 7 months old and has started listening to my husband when he calls most of the time. However, when I call her, she doesn't acknowledge that I am calling her. Don't understand because we get along and spend time together even though, I am in a wheelchair. Her name is Misty and would love to know if have any suggestions? Thank you

if you're wondering: this most likely has nothing to do with your dog liking one or the other person more because, as you said, you both work on improving your bond with her.

It could be the way you two are calling her and difference in voices. If I'm calling my Rottie really sweet, she will probably come but it can be kinda optional in her eyes. On the other hand, if I call her quite sternly (not mad or anything), she immediately comes running.

Is the wheelchair any hurdle for her? Sometimes dogs find stuff they haven't seen before weird and she may just need to be desensitized to that.

Also, check out my guide on recall training, are you following these steps? A reliable recall is easier than most think. Let me know how it's going with Misty!