The birth of a new litter of puppies is a much-anticipated event for any dog owner. The excitement goes through the roof near the last days of the dog’s pregnancy.

Unfortunately, situations happen when all the happiness is replaced with disappointment and sadness. Stillborn puppies and death in puppies shortly after birth is not uncommon in dogs. According to some studies, 8 percent of puppies are born dead or die a week after.

There are a lot of things to consider when you end up dealing with one or even a whole litter of dead puppies. It’s a difficult time for the mother as well.

I’m going to explain what steps to take and make the most of this uncomfortable situation.

What to do With a Dead Puppy?

In short: Let the mother spend time with her dead puppy, clean the area thoroughly and use disposable gloves to present the puppy to your vet to determine cause of death and then decide which kind of burial you want (cremation is pretty common for this situation).

As bad it may seem to leave the dead puppies lying on the floor or the bedding you simply will need to for the sake of the grieving mother. Dogs soon after forget that such a tragedy happened, but for the time being, they are filled with sadness.

If your dog gave birth to a dead puppy or more dead puppies she needs some time to sniff them and count them. Once she realizes some are dead she won’t experience strong anxiety episodes manifested with a continuous search for the lost baby.

15 minutes of grievance is enough for most mothers to come to their senses. Removing a dead puppy too fast can leave her agitated and she may even try to bite you when attempting to move the body.

There are occasions when you should completely prevent the mother from contacting the dead baby. Some puppies are born with ruptured or severely damaged bodies. Chances are their bodies are covered with harmful bacteria and should be immediately removed from the litter.

Some female dogs may attempt to bury or hide their dead puppies. If they have access to a garden it’s likely that’s the burial area they are going to choose. Others will just stuff the dead baby deep in the bedding or push it outside.

While she shows this type of behavior, it’s best if you let her finish with the whole ceremony. Once the dog stops paying any attention to the lost puppy you can remove it.

In the meantime, while you protect the dam, you have to think about the other living puppies (if there are any) and the spread of infectious diseases. The process of decomposition begins almost immediately after death.

Never touch a dead puppy with bare hands because there is a high risk of getting an infection and spreading it. Using disposable gloves place the dead puppy (along with the placenta) inside a freezer bag that can be sealed.

Put the first sealed bag in another sealable bag. While removing the gloves turn them inside out and properly discard them. Any other object that has been in contact with the dead puppy should also be disposed of.

The dead body and the placenta need to be taken to the veterinarian for examination as soon as possible. When the vet clinic is out of hours you can refrigerate (not freeze) the puppy away from food and drinks and sanitize the area after you take it out.

The mother together with any other living puppies also needs to be checked by a veterinarian. The dead puppy has an examining priority to verify the cause of death. Once established the vet will provide recommendations for treatment or additional testing for the mother and the live puppies.

While your visit to the vet clinic the discussion of different ways to dispose of the body/bodies might come up.

One option is to bury the puppy yourself. You can choose between a pet cemetery, your backyard (if allowed by law), and human cemeteries with designated pet sections.

The general rule for burial is to put the body at least 4-5 feet (1-1.5 meters) deep in the ground. This way you prevent the mother from spotting and digging up the body and ensure there is no disease transmission.

Some vet practices offer private cremations where the puppy can get cremated and the ashes returned to you in an urn or a plastic bag. If you consider spreading the ashes, be careful about choosing a location – concentrated quantities can damage plant population by changing soil pH levels.

Communal cremation chambers mean that the pet is cremated at the same time as other animals so you can’t get any ashes back.

My Dog Only Had One Puppy and It Died

If your dog only had one puppy and he/she died, you should let the mother take her time, clean the spot and then visit the vet.

The same rules apply to the vet examination and burial/cremation when it’s only a single puppy born.

However, the single puppy syndrome is a very rare occasion indeed. If you are not sure of the number of babies expected you should get the mother examined for other puppies stuck in her abdomen.

My Dog Had Puppies and They All Died

A litter of puppies without any survivors leaves the owners saddened but also in doubt about what caused such an outcome in the first place.

Before you start looking for answers you must ensure that the mother is in good health condition after all of her puppies died. When you have your peace of mind, you can explore the different possibilities that led to the dead litter of puppies.

Why Are Puppies Being Born Dead?

There are few causes for stillborn litters in dogs:

Dystocia refers to a difficult birth and can be a result of wrong fetus positioning, narrow pelvis of the mother, too large puppies, and absence of uterine contractions.

The narrow pelvis is a concern in younger dog mothers and large puppies are a problem when the father is way larger than the mother. In some breeds such as French and English bulldogs, the birth usually ends up with a cesarean section.

During difficult birth, the puppies remain stuck in the uterus longer than they should have. This can result not only in a stillborn litter but serious health complications for the mother as well.

Nutritional deficiencies occur when the mother doesn’t receive enough vitamins and energy sources essential for labor and nursing. Veterinary check-ups and vet advice during pregnancy can help you ensure the mother is properly nurtured.

Many medications from steroids to cardiovascular drugs can cause death in unborn puppies. Talk to your vet if your continuously medicated dog gets pregnant.

Genetic defects and toxin exposure are responsible for abnormal conditions in the form of congenital defects. In most cases, they prove to be fatal for the unborn puppies.

The two most common microorganisms responsible for puppy death are Brucella Canis and Canine Herpesvirus. B. Canis causes embryonic and fetal death.

Puppies get C. Herpesvirus when they pass through the birth canal and after infection remain weak and fail to thrive, eventually dying. Sometimes the virus can infect unborn puppies in the uterus also and cause miscarriages and stillbirths.

If you’re just preparing or will have other births in the future, make sure to check the dog pregnancy guide as well as what to do right before labor.

The fading puppy syndrome describes a situation when the puppy appears normal at birth but dies within 2 to 9 weeks.

Symptoms of a Fading Puppy Syndrome include:

This problem in puppies is caused by a variety of things. Inadequate nutrition of both the mother and the puppies can be fatal for the whole litter. Hypothermia is also a common cause of death since puppies can’t maintain their body temperature too well.

Puppies are vulnerable to parasites, bacteria, and viruses which can be contracted from the placenta, the milk, the environment. Pathogens can be more potent in overcrowded litters and spread in the blink of an eye.

Inexperienced mothers sometimes accidentally step on the puppies, lay on them, or cause damage when eating the placenta. You can’t keep an eye on the mother all of the time, but if it’s her first litter try to minimize the incidence of traumatic injuries to the pups.

My Dog Keeps Looking for Her Dead Puppy

Allow your dog to explore around the house and understand that the puppy is gone.

If there are live puppies, redirect her focus on them.

When there are no live puppies she can pay attention to, you can try offering her small stuffed toys that resemble a puppy in size and form.

How to Comfort a Dog Who Lost Her Puppies

Giving the mother enough time to grieve on her own is the best thing you can do in this situation. Pay a lot of attention to her and when you talk use a calm tone and a lot of praise.

If she feels like snuggling with you then thankfully accept her but if not, don’t try to touch her if she still doesn’t feel like it.

Are Dogs Sad When They Lose Their Puppies?

Dogs get really depressed and anxious when they lose their puppies. Just like people, you can expect a grieving mother dog to alter her behavior.

They move slowly, sleep a lot, and have decreased appetite and motivation to play.

All dogs are different and can remain in this state for weeks and even months. The good news is that eventually, all of them manage to come around.

Check this article on how dogs can even sense when we’re sad.

Dead puppies get stuck in the birth canal all the time. They might be the reason why the rest of the litter cannot be delivered.

Dead puppies stuck in the birth canal can be either taken out manually by a skilled vet or the babies will need to be surgically delivered.

It’s important to know the symptoms of labor and behavioral and physical changes a few days before. If you are prepared, you will know when to take your dog to the vet if the labor goes wrong.

Will a Mother Dog Eat a Dead Puppy?

An instinctual drive for some female dogs, especially the inexperienced ones is to eat their puppy. It’s quite uncommon behavior, but when it happens, it starts with obsessive licking and grooming of the dead puppy.

It’s very unsafe for the mother to consume the dead baby so it’s advisable for the owner to remove it from the side before she starts biting it. 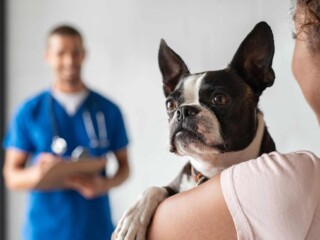