The prevalent and often perplexing practice of tail docking can be found pretty much everywhere in the United States.

Primarily, this is because the American Kennel Club’s set of breed standards showcases over 60 breeds that include a docked tail.

One of these breeds is the lovable, loyal Rottweiler. The AKC breed standard expresses Rottweilers should have a “tail docked short, close to body, leaving one or two tail vertebrae.”

In fact, a Rottweiler with a short tail is so common that many people assume this is how the Rottie’s born.

Unless you’re a Rottie devotee, if you saw one with their natural tail, you might pause in confusion.

Admittedly, the sight is so rare, you might even wonder if you were looking at some new dog breed or a mix. But, what’s the best tail for a Rottweiler: docked or leaving their natural curl?

The sight of a natural Rottweiler tail is so atypical in the United States; many people likely don’t know what it looks like.

When in a neutral position, the tail hangs down, relaxed.

Then, when the pup’s excited or on alert, the tail curves upward, creating a broad arch over the back.

A dog uses his tail for many things, including counterbalance and communication.

Without one, you might not be able to fully understand what kind of message your Rottie’s trying to send you.

This could also mean that strangers can potentially misinterpret your dog’s intentions and react inappropriately.

Look at it this way; humans communicate a lot with their eyes.

If you approach someone who’s wearing sunglasses and strike up a conversation, they could very well be looking at someone else. You might have no clue that all your efforts are in vain.

A Rottweiler with their tail hanging down and showing teeth is likely feeling scared.

However, without being able to see the tail, someone could misinterpret this fear as aggression.

If they respond incorrectly, it could shift the dog’s fear into aggression and trigger a potential attack.

Of course, just like humans, dogs communicate in a variety of ways, like vocalizations and body language.

So it just becomes even more critical to understand the rest of the ways they “speak” to us.

While it’s still acceptable, albeit even expected, throughout the US, including the AKC show ring, that’s not the case everywhere. Almost 40 other countries have banned docking Rottweiler tails, including Germany, the Rottweiler’s birthplace.

Tail docking across all breeds has attracted a lot of controversy over the years, and the opposition continues to grow.

In fact, the Allgenmeiner Deutscher Rottweiler-Klub (ADRK), the primary German organization upholding the breed’s integrity, states in their standards that the tail should be “in natural condition.”

Their guidelines express that at FCI sanctioned events, judges may show no discrimination toward Rottweilers with tails.

Furthermore, in countries where docking is illegal, dogs with docked tails cannot even participate. Other countries, like Switzerland, won’t even allow you to import your Rottie if they have a docked tail.

Germany banned tail docking in 2006; the only exceptions were medical reasons (deemed necessary by a vet) and some working dogs.

Otherwise, docking a dog’s tail is illegal in the Rottweiler’s homeland, and in many other European countries, the case is the same.

Soon, most countries banned the practice, as well as certain clubs in the US, like the Rottweiler Club of North America (RKNA). In their events, the club now adheres to the standards set forth by the FCI.

However, they do grandfather in dogs born before 2019. With the practice gaining more attention (and debate) in the states, the AKC will likely start feeling more pressure to adjust its standards.

Why Are Rottweiler Tails Docked?

Rottweiler tails were docked for several reasons throughout history and it started with protection from Rabies and demons but graduated on to practical reasons like avoiding tail injuries.

The first reason for tail docking stretches all the way back into Ancient Roman times. People believed the practice could protect the dog, and therefore their owners, from Rabies.

Some societies also were under the perception that docking the tail of a dog helped ward off demons.

Of course, these reasons were debunked long ago.

However, more practical reasons also existed and still do today.

Rottweilers were primarily used as working dogs, doing everything from herding to hunting, guarding, and serving as a messenger.

Since these dogs were often engaged in a variety of activities, the risk for injury to their tail was greater.

For example, a guard dog trying to protect his territory could have their tail grabbed and injured.

Messenger dogs and gun dogs running through dense and prickly brush could get their tail caught and damaged.

If the tail became injured, it would hinder the dog’s ability to work, or worse, become infected and lead to more severe health complications.

Tail Docking: A Shift from Practical to Cosmetic

The image of a Rottie with a docked tail began to be so common that it’s what people expected.

Therefore, even in places where people didn’t use the Rottweiler as a working dog, they still docked the tail.

For some, it was to match the expected image, others preferred the look, and others wanted to comply with specific breed standards.

However, if a Rottweiler isn’t acting as a working dog, the odds of a tail injury are not any more significant than any other dog.

Therefore, you could essentially be docking the tail to prevent something that might never happen.

Considering it from another perspective, would you amputate a baby’s arm so they wouldn’t have to deal with breaking it one day?

Of course, in some cases, the tail might need removal for medical or safety reasons, such as an injury or frostbite.

However, this differs from docking a tail when a dog is still a puppy for preventative or solely cosmetic reasons.

How and When Are Rottweilers’ Tails Docked? Is It Painful?

In a nutshell, tail docking is when someone removes a large portion of a dog’s tail.

It’s usually done when the pup is between two and five years old, although some experts recommend within 72 hours could be best.

Only veterinarians should perform the procedure by cutting the tail in the appropriate place.

However, some breeders seek out unprofessional means of tail docking, trying to save a few bucks.

Doing so this way dramatically increases the risk of complications and trauma to the dog’s tail.

Either way, anytime you remove a body part, you need to expect it to cause pain.

Another method of docking is banding, and the breeders typically do it themselves.

They tie a rubber band around the tail, cutting off the blood flow and eventually leading to the tail falling off within about three days.

The theory behind docking the tail between two to five days is that the puppies won’t feel much pain and, therefore, won’t need to undergo general anesthesia.

This is because of the assumption that they still have an undeveloped nervous system.

However, many have said this is simply not the case, including The Royal Society for the Prevention of Cruelty to Animals (RSPCA).

Regardless, it’s essential to assess the strength of the puppy before moving forward with the procedure.

Also, a qualified veterinarian should be a non-negotiable factor. So, if you’re planning to adopt a Rottie with a docked tail, ensure the breeder has a vet do the procedure.

A veterinarian will carefully mark where the cut needs to be between specific vertebrae.

They’ll use sharp, surgical scissors to snip the tail, then possibly use glue or dissolvable stitches.

Sometimes stitches are unnecessary, but large dogs may need them to ensure the skin closes well over the bone.

What Do Veterinarians Say About Tail Docking?

They also discuss how the procedure is painful for puppies and could cause serious trauma and chronic health conditions.

Many veterinarians will decline requests to dock a dog’s tail for cosmetic purposes.

However, they do not apply this stance to removing a dog’s tail for medical reasons. In fact, if a dog experiences trauma to the tail and needs it amputated, AVMA doesn’t consider this docking.

There are actually a few dog breeds that are born without tails, but the Rottweiler is not generally one of them.

However, it’s possible that you stumble upon a bobtail Rottweiler.

Their naturally occurring stumpy tail results from a gene mutation.

Since tail docking is illegal in so many countries today, many breeders in these places have begun to specifically breed for this gene.

This way, they can provide people with Rotties that have a naturally docked tail that wasn’t created illegally (or what some consider cruelly).

With more and more breeders starting to breed for this gene mutation, we might start seeing some more bobtail Rottie’s around.

What about you? Do you have a Rottie with a docked tail or one that goes all-natural? I’d love to hear from you in the comments! 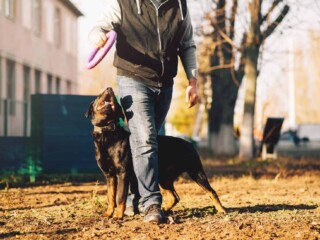 How To Make a Dog Aggressive (Unintentionally)
Read Next Post →