Border Collie Colors – The Real Ones As Per AKC

The Border Collie is a beautiful and loving breed. They are known for their intelligence, eye-catching coat colors, and happy-go-lucky personality.

That being said, it can be a hassle going through all the possible coat colors of the Border Collie.

While the AKC accepts a wide range of colors, they don’t accept each and every color and some are preferred over others.

So why can coat color matter? There are several points that the coat color can help with.

Do you know the most common Border Collie coat colors?

The most common Border Collie colors are black and white, blue merle, and red.

However, there are 16 color and marking variations in total.

Ready? Let’s check them all out so you can make an informed decision!

It’s interesting that the kennel clubs have differing views on this and not all have equally extensive breed standards.

The Border Collie appears in all colors or combination of colors and/or markings. All colors are to be judged equally with no one color or pattern preferred over another. White markings may be clear white or ticked to any degree. Random white patches on the body are permissible but should not predominate. The predominant ear color should match the primary body color. Color and markings are always secondary to physical evaluation and gait.

The United Kennel Club mentions the following in their breed standard:

Black and red. Less predominant colors include gray, blue merle, red merle, lemon and sable. May have white trim only, and/or may be accompanied by tan points.

All colors or combination of colors and/or markings permissible. Solid color, bi-color, tri-color, merle and sable dogs are to be judged equally with no one color or pattern preferred over another. White markings may be clear white or ticked to any degree. Random white patches on the body and head are permissible but should not predominate. Color and markings always secondary to physical evaluation and gait.

These are the accepted colors as per the AKC.

These colors should all be eligible to participate in confirmation shows.

Not all of these colors are equally sought after, some are pretty rare.

While some so-called breed enthusiasts fall back on the argument that some of these colors are not possible to achieve with purebreds, they have all been seen and confirmed

Side note: How that confirmation would hold up nowadays is hard to say, especially since there have been no DNA tests everybody can look up for each and every color.

However, just because all these colors are theoretically possible doesn’t mean that there’s no crossbreeding.

Some backyard breeders utilise other breeds in their program to achieve a desirable color that’s rare for this specific breed.

Long story short, here are all the accepted colors as per the AKC:

Contrary to popular belief, the black Border Collie is not 100% black.

Instead, white patches are allowed but black is predominant. This color type is very common and easy to find whereas fully black Border Collies are very rare.

They usually always have white patches on their tail, paws, neck and head.

The Blue Border Collie happens when a dog with a white base coat has the black ticking gene, and is currently one of the rarest colors in Border Collies.

Ever wondered how the Border Collie’s red coloration came about? There are two theories, that either the Border Collie was bred with a red Doberman or more likely they were originally mismarked black dogs.

The color is not common and it’s hard to tell for sure if you have one unless there are other family members who also show this coloring.

The Red Merle Border Collie is the result of a gene mutation that first occurred in Scotland at some point during the 1940s.

The Gold Border Collie also known as the Black Golden Retriever is a color variation that first surfaced in the 1990s.

Gold Border Collies are not registered with their own breed clubs, but they are recognized by AKC and UKC.

When it comes to dog coat genetics, everything seems to be connected. Lilac emerges from a diluted brown or red gene.

Both parents must carry the chocolate and dilute gene in order to produce lilac offspring.

Lilac Border Collies can also be merle with diluted patches instead of black ones.

Sable, just like merle, is a coat pattern with a very unique depth.

At the base, the fur is black, chocolate or tan and the same strands can be white or black at the tips.

Sable Border Collies also have white markings on various parts of their bodies.

On the tan-colored parts of the body, a merle pattern can develop if your dog is a carrier of this gene.

With any merle, there is a high possibility that a few speckles of discoloration also happen on their noses and paw pads.

Saddleback Border Collie look a bit like tricolor and white sable in the name, you can expect the main colors to be black (base) and tan.

Similar to normal tricolor, there are three different colors on the fur which in this case are white, black and tan.

You can differentiate the two by looking at how spread out the colors are.

Over time, the distinction between the base color and the tan will increase as the tan continuous to spread.

You may have never heard of a brindle Border Collie before as this coat pattern occurs most commonly in Bullterriers, Cane Corsos, and Boxers.

A brindle colored Border Collie has a base coat of black or brown (not white) with dark “tiger” stripes that cover the body.

Brindle Border Collies are not to be mistaken as a mix between other breeds, instead they have this color patterning genetically coded into them!

The main difference is that these dogs have a white base with the other color only being secondary and sometimes only covering little areas of their body.

The AKC notes that these colors exists and mentions them in their directory for colors/markings but they will not be able to compete in all types of shows.

Let’s check which colors or patterns are included in this category.

Let’s start with the first one of these.

The reddish tint can be best observed when your dog is sunbathing outside.

The seal coat is often mistaken for mahogany colored dogs by those who are not familiar with this color type.

Slate Border Collies sure have a fancy name.

The slate coat is usually a mixture between silver and gray and appears a few shades lighter than the blue color.

The color can vary depending on how much white they have, with some dogs being grayer than others!

The silvery look shows up when there are heavy markings on the head or face.

As the name suggests, this coat color resembles the gold Collie, but it’s predominantly white or cream.

Some areas of the body will be more wide and gradually fade into a cream-gold.

Border Collies that have a white base color with a black seal coat that turns reddish in sunlight are called white and seal.

Sometimes only little daylight is required and you won’t be able to see the black color at all.

There are also a couple of other color this remarkable dog can come in.

However, it’s not always easy to distinguish what people mean when they refer to certain colors.

It can happen that two people have different ideas on what exactly a certain type of gold is and they call it something different, especially if they’re registered in different kennel clubs.

Tri-color Border Collies can happen and while they’re not common, they’re not as rare as one might think.

Chocolate is often just another term for a deep red color (also referred to as “brown” by some).

The Silver Border Collie coloration is generally titled as rare and was first seen in 1956. In 1959, this dog won Best-in-Show at an international show and not all judges have been aware of this dog’s lineage. 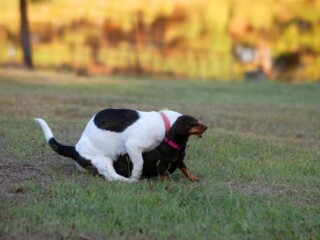 Can Dogs Be Gay? You'd Be Surprised...
← Read Last Post 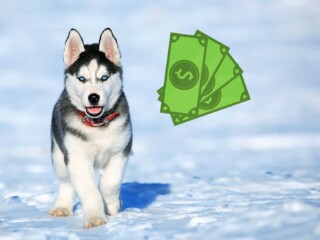